History of Our Church

Our Church has two histories 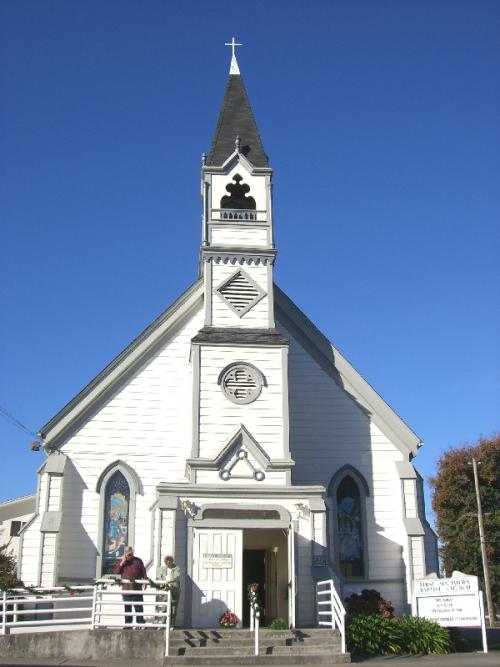 First, there is the history of our building. We like to call ourselves a "New Church, Meeting in an Old Place." Our building, built in Gothic Style, was dedicated on July 4, 1875. The church meeting here at the time was called the, "Christian Union Society of San Lorenzo." Actually, the people were of various denominations and since they did not have enough people of any one protestant denomination to build a church, they simply teamed up. The church met here continuously until World War II when the church closed for a couple of years.

The building was purchased by our church in 1949. A few years later, in 1955, the church wanted to install a baptistry and so they removed the old pump style pipe organ to make room for the new baptistry.

In 1987, the rear of the building was removed along with the old victorian parsonage that was next to the church on the Usher St. side. Added to the back of the building was a 5,100 square foot, two story education facility. In place of the parsonage, parking spaces were installed.

At about the same time, the church began replacing the windows in the main worship center. The windows were replaced with stained glass. The chapel windows tell the story of Jesus beginning with his birth and ending with his ascension. In the side rooms, there are four windows with scenes from the Old Testament.   See our stained glass windows.

In 2001, a new lighting and sound system were installed and in 2002, another new baptistry replace the old one installed in 1955.

Then there is the history of our church. Remember the old saying with the hand motions, "Here's the church, here's the steeple, open it up and see all the people." Well, a church is not a building. It is a group of people who are called by God to do His work in our world. This is the story of how we became a church.

Like many of our early Southern Baptist Churches in California that were either started in someone's home or the local chicken coop, so are the beginnings of the First Southern Baptist Church of San Lorenzo. While our country was at war overseas, a group of committed Christians were preparing to fight a different kind of enemy at home. Their strategy was to begin a local Baptist church.

Lon (Elonzo) Braziel and his family moved from Oklahoma in the late 1930's to the Central Valley. After a short stay, he and his family moved to San Lorenzo. Lon, together with his family and some friends began the church in his home in 1942. Not long after its beginnings, the church relocated to a building in what was then called Russell City. The Braziel Family had quite an influence in the church being that three brothers, J.B., Lon. Luther and their brother-in-law, Curtis Roberts, were the first ordained deacons. The church was originally known as Russell City Baptist Church and over the years has been called by several names including: First Southern Baptist Missionary Church, San Lorenzo Baptist Church, First Baptist Church, the Southern Baptist Church of Russell City and others.

From the beginning, the young church was looking for a permanent home. They began a building fund as early as 1943. In February of 1945, the church voted to give 10% of its income to the state Baptist convention and 3% to the local Baptist association, which began the long commitment of our church giving to support missions.

Some time in the mid 1940's, the church moved from Russell City to property on Hesperian Blvd. south of Peach Ave. in San Lorenzo. This is the present site of Lewis Rents. The church met in a building, which was affectionately called, "The Barn." During the late 1940's, the church was growing and sensed a need to build or move to another location and build. As it turned out, the old church building at College and Usher Streets was for sale since the church meeting there had moved to a new location. So in 1949, for a price of $15,000, the current location was purchased, where the church has met for services ever since.

Over the years, the church has started or helped start several missions including one in Livermore, Castro Valley and Washington Manor. The church started in Washington Manor is now the Halcyon Baptist Church in San Leandro.

In the year 2000, First Southern received a Commendation from the city of San Lorenzo, recognizing the building as an Historical Site.